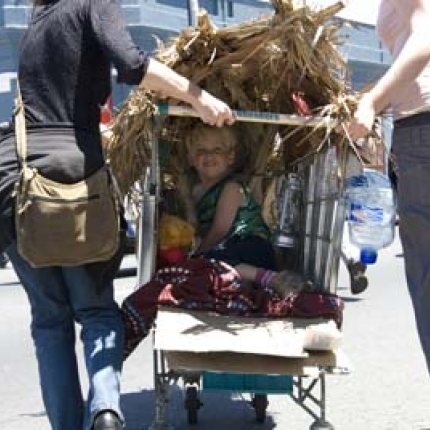 On my first visit to South Africa in 1998 I met Jill Trappler, Garth Erasmus and various other artists and I heard about their plans of starting an international residency programme. I was at that time a board member and mentor for visiting artists at the Thami Mnyele Foundation in Amsterdam, a foundation running a residency program for (South) African artists. It was actually on behalf of that foundation that I came to South Africa, in order to visit all the major art institutes and meet the majority of artists, curators, teachers and students of different art academies.
In the years after I participated in various residency programmes myself. In 2002 I was invited to come to Durban where I participated in a residency program hosted by the Technikon Natal. The reflections of this stay were exhibited in a show called "on the road" at the NSA Gallery in Durban. And after my residency and exhibition in Gdansk in Poland in 2006, Jill Trappler invited me to apply for a residency at Greatmore studios. Then it proved difficult to find a sponsor for this project and it almost had to be cancelled. Fortunately Greatmore Studios found the means to cover the costs for my stay and my air ticket was paid for by the Hoogstede Fonds in the Netherlands. This made it possible to come and work for me in Cape Town from September 8 until December 8, 2008.

I arrived on a dark, rainy and windy morning, which was -of course- not the image we foreigners expect from Cape Town. Taking a shared shuttle from the airport to the artist house in Milner street, where nobody was informed or ready for my arrival, seemed a bit rough. Also from my experiences at the studios in the Netherlands I don't think this the best way of welcoming a foreign artist, especially if it would be a younger and less experienced one. At the beginning of my stay I felt left somewhat out on my own, to deal with my own stuff. This feeling might also be influenced by the residencies I did before, where I felt more direct support to start off with my project. On the other hand during my stay I experienced enormous freedom in the way I wanted to work out my project. And I enjoyed the welcome and openness towards my family when they came to join me.
From my previous visits I already knew a few people. This was helpful to me. Like this I could expand my network and communicate and discuss art and my work, also with colleagues working more in the same stile and with the same media as I do. I must say that I missed this possibility within the walls of Greatmore studios, where I found myself surrounded by painters, from whom the majority works very realistic and with themes often related to township life. I encountered that Greatmore studios has a very strong position in the community and works with community related projects. In an area as turbulent as Woodstock this is a very positive element. Although due to this position it might have been harder for me to bridge to the more academic art world, where working with new media is more common.
Working in a studio with few tools available as well a lack of materials that are quite at hand in the place I come from, it was challenging to find other way of expressing myself. Wanting to relate also to the local situation -as far as I could of course- I felt that my work, or the way it looks also gained a local quality. The way of expressing myself seemed to me much more in the style that artists from here work with than I would have thought of in advance. Or probably that any work will look like back home, when it will reflect my stay here.
Being away from ones own studio also gives freedom to explore other ways of working. For me this resulted in my installation base on 7 supermarket trolleys. Working with installations is something I did many times before, but never had I made one that was based so much on found materials and build up that spontaneously (because of the limited availability of tools).

After showing the installation at the open studios in November, I took the trolleys out on the streets of Woodstock. Strolling down on a busy Saturday morning with the help of fellow artists and other interested people (some of them just joining in along the way) we evoked quite some public attention. Some positive (thinking we were protesting against high food prizes) some negative (when we were blocking traffic on the Main roads). Eventually we left the trolleys on a small open field. From that moment on I was interested what would happen. Some of the materials used in my work could be reused, some had a little value. To my surprise though, within 15 minutes more than half of the "work" had disappeared and after six days it had completely vanished.
Making an artwork and action that gave me the opportunity to interact directly with the public, was something I always wished to do and now I could finally realize it.So I did as well with my other piece which was created in collaboration with South African artist Zavick. On my request he sew my photos of Cape Town on various clothes, having the freedom to do so in any way he would like (cutting them out, inside-out, adding logos etc..) The result was a laundry line. This line we put up on ten locations in town, suburbs and townships, using anything at hand: trees, sculptures, fences, already existing laundry lines, cars, thus interacting with the public.
The reactions varied quite often, but seemed generally tamer than with the trolleys. Most often we were seen as another street vendor and ignored, although people who came closer generally appreciated our action. On a Friday evening we got together with a group of about 25 people, setting up the laundry line on the beach of Llandudno. At dusk we parted from the work by lightning it up and burning the whole piece. We received as well positive as mixed reactions.

All the actions are well documented (on photo and video). At the moment of writing I am still in the process of editing. This is also the case with the video piece I am creating: CiTi lives. This video is shot in a documentary style. Scenes from Cape Town (often shot out of a riding car) interchange with interviews and quotes of people living in this city. There are plans on taking the Laundry line project further. Making a second edition in Amsterdam and afterwards having a presentation and publication. At this point Gallery Bell Roberts in Cape Town is interested to participate.
For the workshop I approached various people and institutions. Preferably I wanted to work in the field I am most experienced in: video, photo and new media. The response though was very little. As most institutions were heading towards the end of their year and students battling for their final exams, there was no interests for the workshops I offered. Finally I decided to do a mural with all the school children from the school, where my daughter Barbora was these months: Gaia Waldorfschool in Oude Molen Village in Pinelands. I made a design according the philosophy of the school and finalized it in interaction with the children. The result is a very nice landmark for this school on an outside wall of their playground, which functions as a landmark.