Two Months of Magic at the Instituto Sacatar, by Margriet Westerhof

Two Months of Magic at the Instituto Sacatar, by Margriet Westerhof

I wanted to make a new animation film with sand objects and the Instituto Sacatar seemed to be the perfect place to do that. Sacatar is based on Itaparica, a Brazilian island, with long stretches of beach all around; enough sand to make a feature movie. It was 2008 when I applied for my residency. I spent day after day in dark studio’s, working on my second experimental animated short and I needed a dream.

The Instituto Sacatar (Bahia, Brazil) is popular with artists, musicians and performers from all over the world. Even though you can see the rapidly expanding city of Salvador from the pier, Itaparica has the laid back atmosphere of a tropical island. Horses flock together on the beach, fishermen in wooden canoe’s are crossing very expensive sailing boats and there is music all around, whether it comes from the back of a car or from one of the many religious festas. The culture is mainly Afro-Brazilian, so you can get inspired by candomblé (Afro-Brazilian religion), capoeira or samba. If you want to collaborate with local artists or people from the community, the Sacatar staff will arrange this for you. But there are no obligations. If you want to withdraw yourself from all these stimuli and concentrate on your project, you are free to do so.

The heart of Sacatar is a big white house, where until a few decades ago Catholic ladies from Salvador used to spend their summers. The rooms are situated around a patio. A huge veranda - with hammocks and wooden benches - overlooks the see. At low tide you can walk as far as you want on the dreamy plains of wet sand. If you decide to take a canoe out at high tide, you are sometimes amazed by the intensity of the waves.

There are studios and workshops for artists from all disciplines. A remote and soundproof seaside ‘bungalow’ for composers and musicians. A performance studio that can turn into an open air stage with seaview. A ‘treehouse’ for writers. And studios for the visual artists, with inside gardens (including two turtles!) and concrete floors.

In 2009 I received the message that I was invited to this paradise, out of almost 600 applications. I had to be patient though. The Sacatar staff placed me from August till October 2011. It is possible to point out a date of preference, but if you don’t really depend on a fixed date, they try to fit you into a carefully composed group. Which is important, because the five to six fellow artists become more or less family. You share a house for two months and (unless you like to be on your own) you spend three meals a day together. You don’t have to worry about daily routines like cooking….it is all taken care of. There is even a laundry service on Thursdays.

I was lucky with my appointed roommates: a composer from Switzerland, a South African photographer, an Iranian-German multi media artist, and a couple (Greece/Ukraine) that specialized in performance and dance. Apart from exchanging ideas and discussing work, we could laugh, dance, drink, talk and watch silly television series together. There was a really good mix of solitude and company.

It was also interesting to observe each others quest for inspiration. Especially in the beginning of the residency. Most of us had the objective to do something with the culture and history of the island. But when you find yourself in paradise, the urge to explore sources of information seems to be far away. It even looks as if the necessity of creating a piece of work has totally disappeared. At least…. that’s how it worked for me, especially in the first two weeks on the island. So I decided to take this feeling of uncertainty and doubt as the starting point of my project.

I already knew that I wanted to make a book. Making a sand animation was out of the question, because I didn’t want to bring all the necessary equipment. And besides that…. I needed simplicity. Nothing I couldn’t do by myself. So I decided to make a story out of drawings. About my alter ego, Isadora Anderwereld, who gets instructions from a mysterious travel agency to explore the unknown (or unwanted) areas of her personality.

The first week of our residency was filled with excursions, meant to make us more familiar with the island and Salvador. And crossing the historical squares of Salvador I bumped into the main source of inspiration for my book: a traditional candomblé dress, put down for tourists to make photographs. For only two reais you can experience how good the Bahian culture looks on you.

I knew right away that this was a perfect starting point for Isadora’s journey. Her first instruction from her travel agent would be to pose behind the dress, feel uncomfortable and discover step by step what the dress really wants to tell her.

In the mean time I had started to collect empty plastic bottles during my walks on the beach at low tide. There were lots of them! They even turned up in my drawings. After my encounter with the dress in Salvador the idea grew to start a parallel project. The making of my own version of this candomblé dress, a Baiana out of plastic bottles.

I thought it would be funny to reverse the situation and let people from the island pose behind my bottle dress, so I could use the photographs for my book. Along the way I realised that this wasn’t a very good idea. It would look like I accused them personally for the pollution of ‘their’ beaches.

So I decided to organise a photo shoot of myself in the dress, at the high water line of tide.

To show my transformation of both – the dress and the pollution – into something new. Something close to the culture of Bahia (Yemanja, the candomblé goddess of the seas is honoured with perfume bottles), but still unmistakably mine.

The harvest of two months of magic.

What is wrong with a second hand dress? The animation.

This very short animation (175 frames = 30 seconds) belongs to the book "What is wrong with a second hand dress?", which was produced during the residency at Sacatar and came out on september 8th, 2012. It is hand drawn with black ink on A-4 paper. More information about the book: www.isadoraanderwereld.wordpress.com (only Dutch language). Animation by Margriet Westerhof, september 2012. 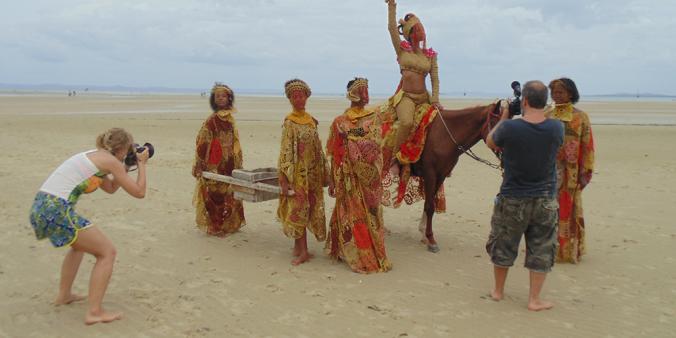