At the beginning of the nineteen fifties, the bridge between Štúrovo (Slovakia) and Esztergom (Hungary) was in ruins. It was almost impossible for relatives and friends on each side of the Danube to get in touch or communicate. People would go down to the river, mostly on windless evenings, to talk to each other. The water carried the sound of short messages, often encoded, to the other bank half a kilometre away. The AquaPhone performance refers to this phenomenon, honouring all the lives whose secrets had at one time been entrusted to the Danube, recalling this testimony of people's yearning to talk together, and of their inventive genius bridging borders and distances under difficult conditions. The Swiss musicians Alfred Zimmerlin and Markus Eichenberger took up the idea of Hanneke Frühauf and created this performance, a musical improvisation on a dialogue. 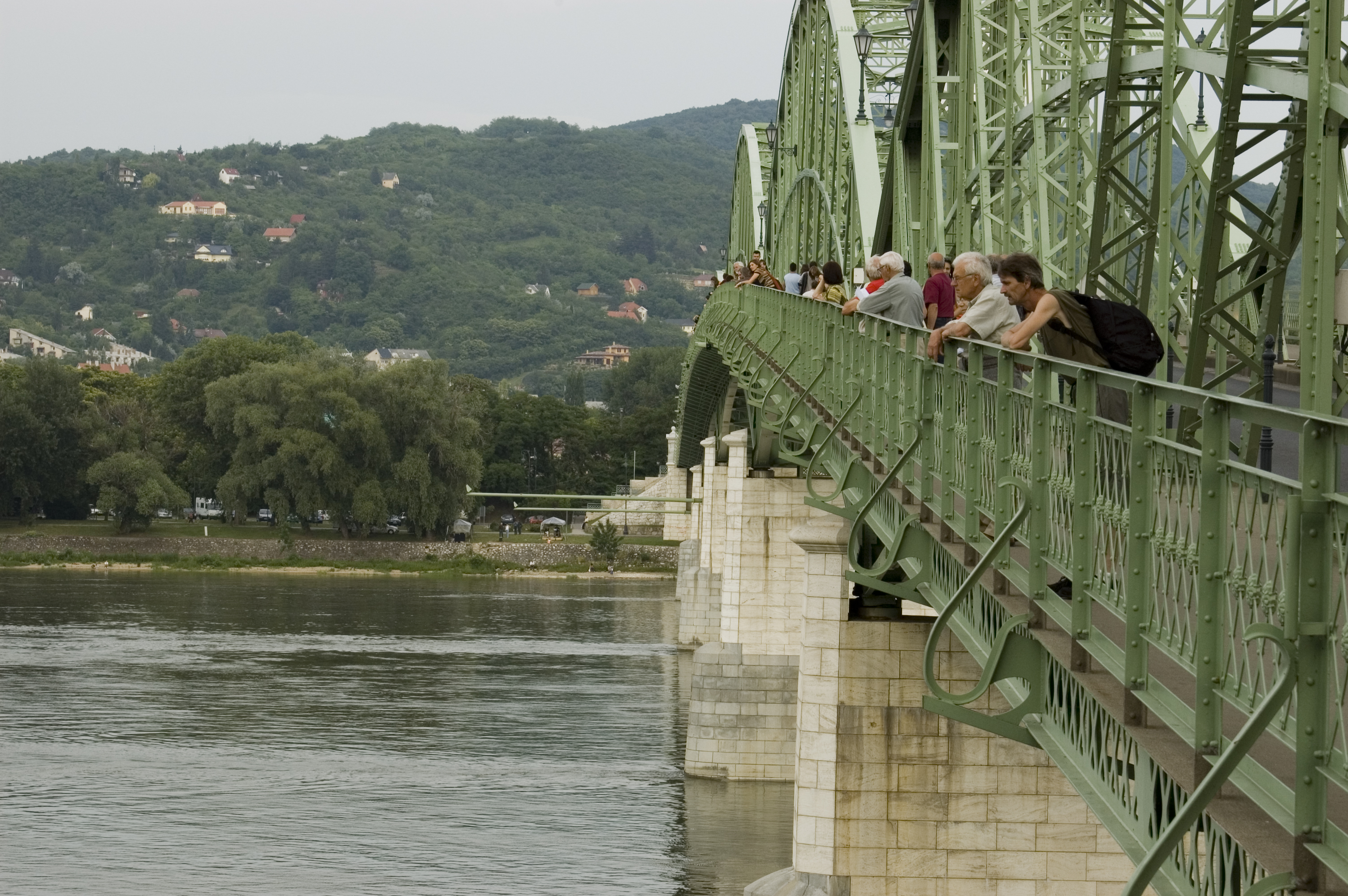 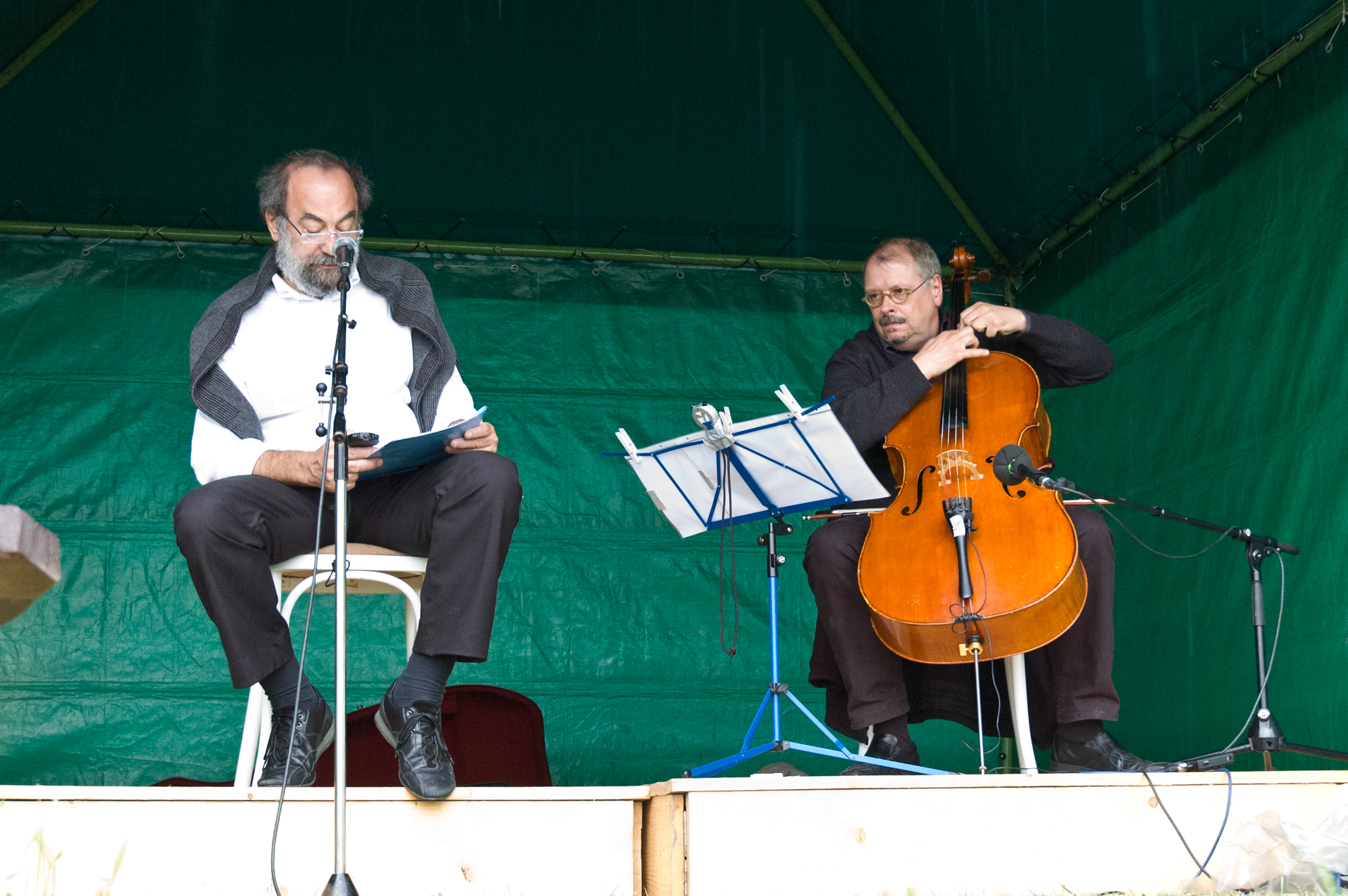 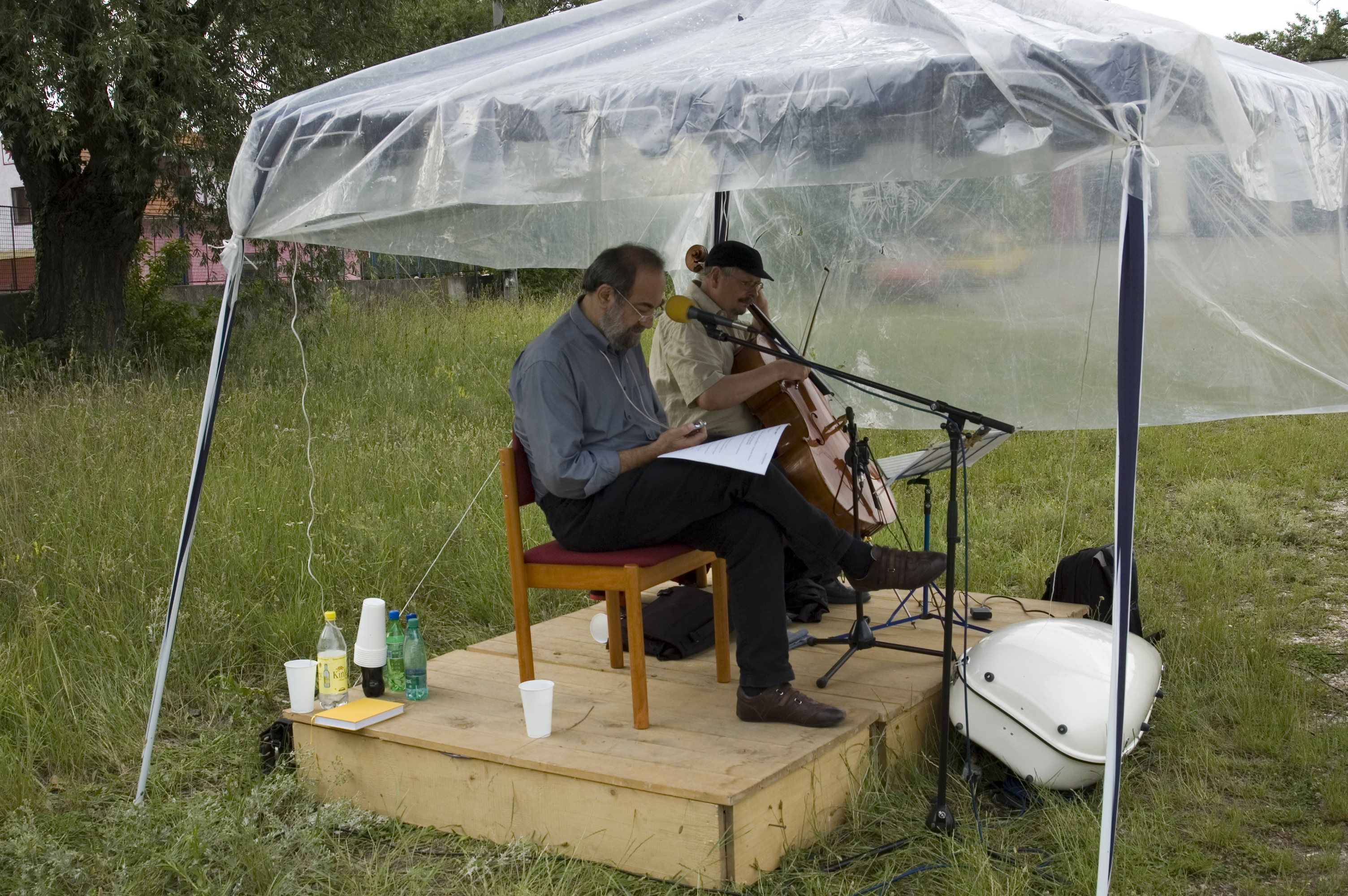 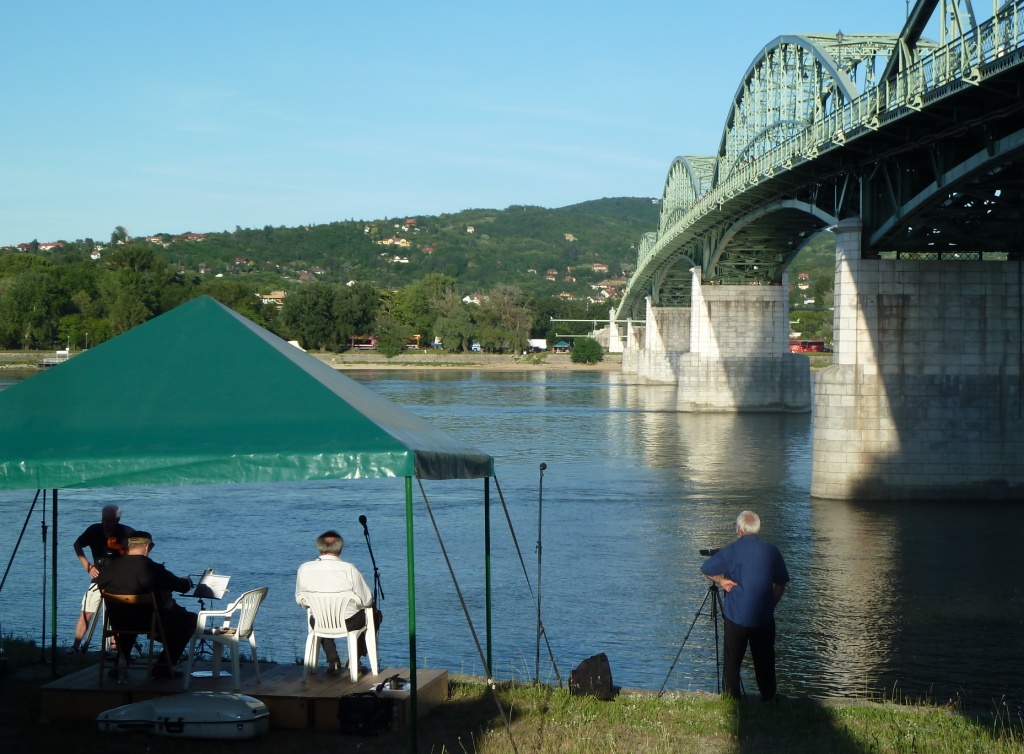 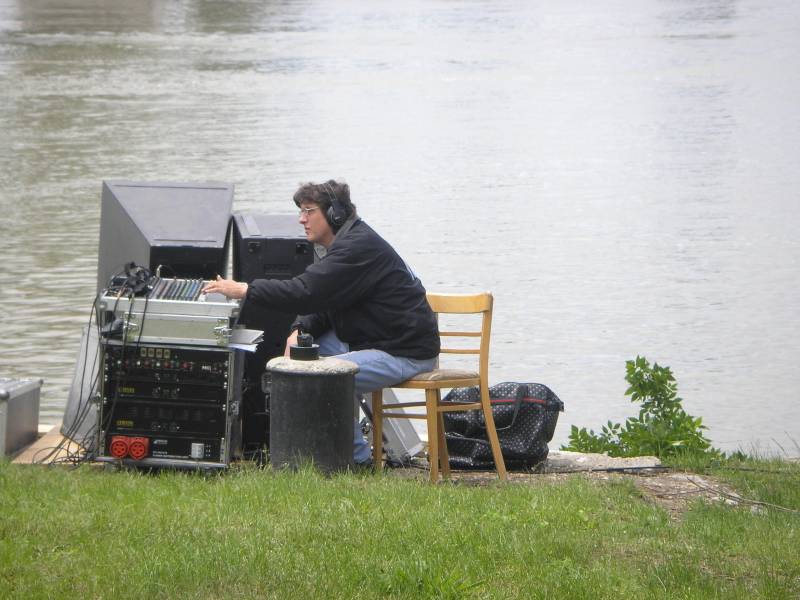 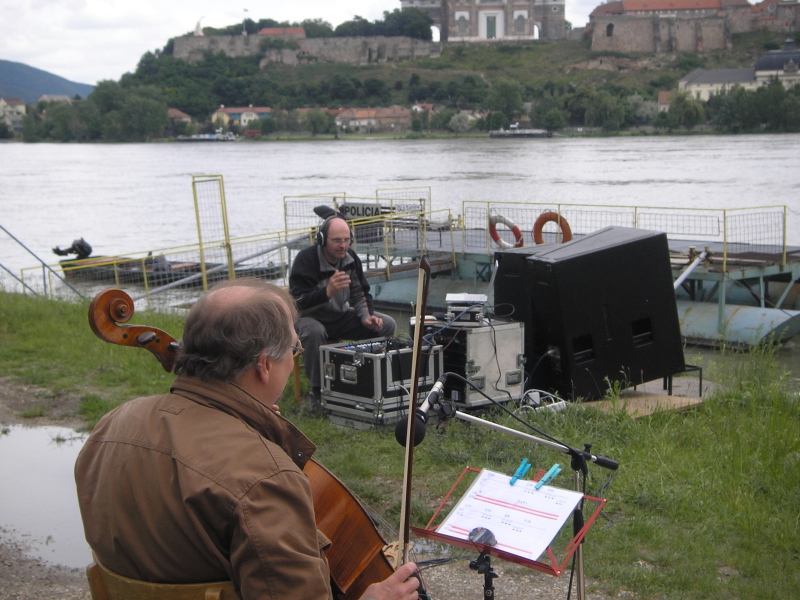 A most intriguing performance event celebrated its tenth anniversary last June: AquaPhone. On a Saturday evening a dialogue took place between performers on both banks of the river Danube between Štúrovo (Slovakia) and Esztergom (Hungary). Words and music were sent back and forth over the 500 meters wide river surface. Vowels, consonants, and syllables travelled over the water. They were entrusted to communicate a text by AquaPhone initiators Hanneke and Karol Frühauf in German, and in Slovak and Hungarian translation.

TransArtists: How was the weather during the event?

Karol Frühauf: It was a bit windy, one side had to speak or play against the wind. You will have the best acoustic condition when you catch a wind still moment. When you are lucky enough and there is humid air, the sound travels perfectly over the water.

TA: What about the language? Does one language travel better over the river than another?

K: In general it doesn't depend so much on the language but on the way you use it. The best way to communicate is to use short words and short sentences. You can try that in any language. But indeed it is a bigger challenge in German than in Hungarian or Slovak language. So, in German it's an effort to keep it short. German syntax also makes it more difficult, because you have to wait till the end of a sentence to get the full meaning, and a part might already be blown in the wind over the water.

TA: Isn't that the adventure of translating, that you don't know whether the meaning reaches the other side?

K: This is a common principle of communication; you never know whether your message reached the other side, therefore is feedback so crucial in communication.

TA: Translating is always also transforming. How do you think about?

K: It depends. If transforming means the use of words with different meaning in the target language, taken the sentence word by word, then yes. But if you need the words with different meaning to express the mood, the feeling or to achieve the same melody or rhythm as the text in the source language then I would not call it transformation. You don’t translate single words; you translate atmosphere, context, music. Of course, I am talking about translation of literary and not of scientific texts.
But there is a big difference between translating in writing and speaking. I realised it very strongly during the presentation of the book on 10 years AquaPhone. I had to switch between Hungarian, German, and Slovakian. To achieve the above sketched perfect translation is nearly impossible verbally, at least for me. You have to react immediately; people hang on your lips waiting for the translation. When you translate in writing, you can take your time and think it over, search in dictionaries, edit, correct, etc., until you get there.

TA: You have been raised in an environment in which people speak Hungarian and Slovakian. Now you live in a German speaking environment. How do you cope with translation?

K: I don't translate from one language into the other. It just doesn't work like that for me. I think in the language that I speak, at that moment. This depends on the situation I am in, on the person I'm talking to. If I talk to a person with Slovakian background, I think and speak Slovakian. If the situation “is” Hungarian, then I speak, and think, in Hungarian language. I wonder how the previous mayor of Štúrovo would reflect on this; he changes the language in the middle of the sentence.

TA: Did you speak across the river when you were young?

K: No, but I saw it when I was 6 or 7 years old. Hungarian has been used, because it were Hungarian speaking families that were divided by the border. It was not a daily but a general practice. The authorities knew about it for sure and remarkable enough, they did tolerate it.

TA: Did you ever see deaf people communicate over the river via deaf language?

K: No, I've never seen it. It is difficult to see the person at the other bank of the river clearly. It's too far away, 500 meters. May be with binoculars you could read the sign language.

TA: In all the 10 events of AquaPhone musical improvisation plays a big role, why?

K: Music is so intense, mystic, abstract. Music encapsulates the meaning of words instead of just to accompany them. Improvisation was central to the performance so far. The musicians have a basic structure, which they adapt to the text of the year. The text can be lyrics, a dialogue, or a kind of essay. During the performance they improvise within the given structure. The music dialogue is demanding because it takes four seconds before you obtain feedback on the sound you did send. Within that time a lot can happen. Motor bikes can haul through the bridge; a boat can pass on the river and honk; birds can start to sing.

TA: How does AquaPhone relate to the Bridge Guard residency in Štúrovo, which you also initiated?

K: AquaPhone is once a year. The bridge is guarded every day, by the artists-in-residence. In the Bridge Guard residency Slovak and Hungarian languages meet the language of our international guest. To deal with those languages is a challenge and has an influence, we believe, on the guest, on his or her perception of the world.
English is the common language in and around the residence. It is the common denominator of communication today. It is good to have one. But I think we would be culturally richer if we would build language bridges. It is a kind of silly, that Austrian on the Hungarian border don’t learn Hungarian, that the Slovak on the Hungarian border don’t learn Hungarian and the Hungarian on the respective borders don’t learn German or Slovak. I would recommend Europe to launch a program “learn the language of your neighbour”.

In 2004, TransArtists published in Newsletter #7 an interview with Karol Frühauf on the Maria Valeria bridge in Štúrovo, Slovakia. In 2001, the bridge was renovated to connect Slovakia and Hungary again. For former local Frühauf its resurrection was the reason for a residency project: a sign of crossing boundaries. Read the interview here. 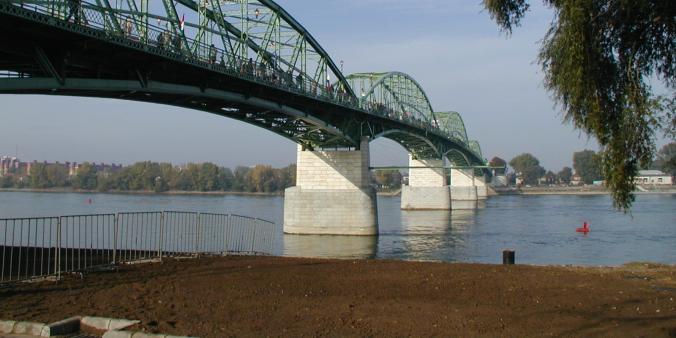 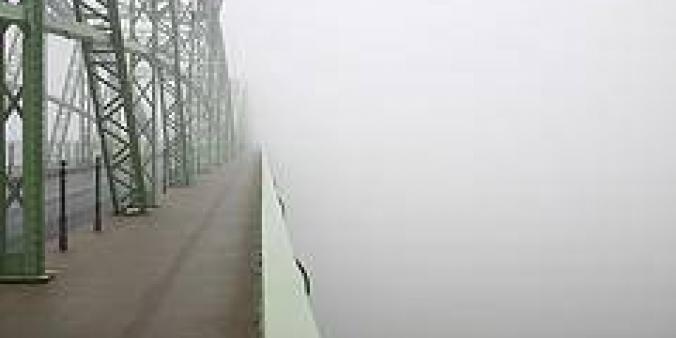