The edge of the world

The edge of the world

TA: Can you describe what you see if you look outside your window?

At first I see a balcony closed with a sort of open metal fence. it is tradition here to 'close' balconies this way, probably to prevent children and drying clothes to fall down. Then the lower half of my view is occupied by two rows of white, red-roofed villas and the upper half is a combination of sea and sky between which the border is mostly vague, probably due to mist and/or fog. But I can see a few small islands and an array of different types of ships: from container and other freight ships to smaller ferries and one-engine open fishing boats.

TA: That sounds a bit like Alcatraz but also like a place at the very end of the world. Does your surrounding there resonate in the things you are making there at the other side of the earth or did you go there with a specific work in mind?

If it's Alcatraz, then it's only the cage of my European mind. Everything here seems rather normal to me. Xiamen looks in so many ways like a Mediterranean European city. But at the same time I realize there are huge differences that are impossible for me to get a grip on, like the incredibly different language and a complete other way of thinking. I came here to make an exhibition and thought it best to come with a plan and some works. If I would find something more interesting I could change my plan.

That's interesting, your environment looks familiar but things appear not to be what they look like? Do you have an anecdote about this?

OK. An example. I wanted something for my exhibition here, to be specific a trunk of a tree. But where to get this? And how to arrange that they would saw it in an unusual way? There are Chinese that can help you in such cases. There was A. that I'd met, who seemed perfect for the job. But my adviser here told me that I could better hire B. because he was honest. B. helped me admirably and in a few hours my problem was solved. Afterwards I wanted to give B. money for his help, but he did not want it. I insisted but he refused again, so I gave up. I talked about this with my advisor and was told that if I would give him the amount in a red envelope, he could not refuse it. I want to do this, but I haven't seen B. since...

The title of my exhibition is 'Does the branch know there is a trunk.' I used 'tree' as a metaphor but also as a starting point for my visual study. So there are a lot of photographs, other images and words of trees but I try to talk about roots, reality and dreams in the eastern and western world. I wanted a real, sliced tree to make a connection between the four exhibition walls and also ,a.o. as a symbol of growth.

TA: Are the eastern and western ideas concerning trees in relation to dreams and reality miles apart or did you find overlapping? please explain. How did you do you research? Is there anything surprising that came out of this?

What I wanted to do with my exhibition was to include as many meanings of leaves-branches-trunks-roots as I could find. I hoped that every visitor would leave the show with a different idea or question in his mind. I did not check that but what surprised me that where I compared leaves with dreams, a Chinese visitor thought roots would be more adequate.

I did my research in The Netherlands by making photographs in the city and in nature, by looking for cheap reproductions of paintings and drawings of trees and by browsing google images. In China I did the same and spend many days in Xiamen, it's parks and the huge botanical garden. Surprising for me was the great respect Chinese have for tradition. Many big trees have their age mentioned on a blue shield. The oldest one I saw was 800 years old. 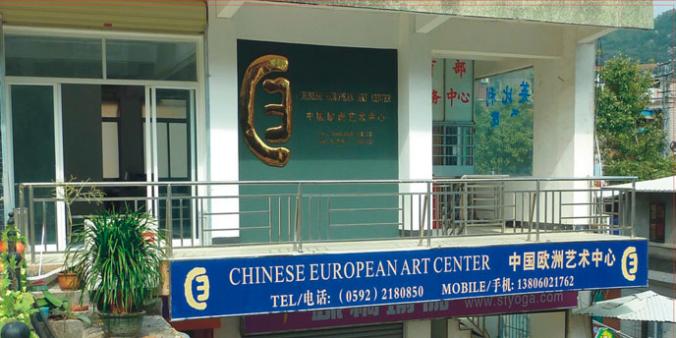