In the race of becoming a first class economy the different textures of urban development in Seoul are disappearing rapidly. Offices, shopping malls, officetels (office+hotel, implying an apartment with a few more amenities at a bit of a higher cost), rise in hasty optimism. Few places are left that contain a different feel of past time.

Last week I had the chance to take a look inside the old Seoul train station. One of the remaining traces of architecture under Japanese occupation, built in 1929. The function of the train station has been relocated a few years ago and left the building abandoned. Designed by a Japanese and German architect the building carries Korean and Japanese decorative elements, as well as references to the Amsterdam Central station and the station in Frankfurt. This eclectic mix is waiting for ''renovation" next year. Until then it will give place to cultural events as concerts, a fair, and in the autumn this year an art project - festival. One artist I met, Baruch Gottlieb, (Canadian sound artist, once resident at Ssamzie Space) documented the area around World Power (Sewoon) Plaza, central Seoul. An area of twisted alleyways were electronic-solderers, steelsmiths, printers and electronical wholesalers reside. It still keeps a feeling of the early 80s of man manufactured times. The area will be restructured the coming year. More about this and the project you find well illustrated in Baruch's article Necessity for Nostalgia . More information about Korean cross-cultural issues in visual culture you find in the articles of BOL magazine. A journal published in Korean and English by Insa Art Space (Arts Council Korea). 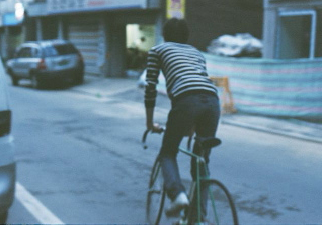 Jowan, on his self built bike (fixed gear).