The first stage of the Mutual Impulse project was meant as an inventory of artist-in-residence potential in Moscow and St. Petersburg. In workshops and expert meetings we addressed the ways in which the artist-in-residence concept is applied to the Russian situation: what's going on, what are its current forms and what is its potential for the future? Read here more on Russian artist-in-residence tendencies and intentions.

Workshops and meetings concentrated on the following questions: 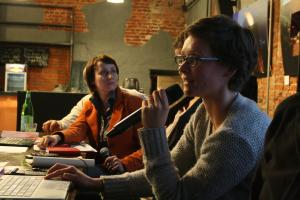 The meeting was meant as a first mutual acquaintance between Dutch and Russian organizations involved in artist-in-residence matters. Time was needed to get accustomed with one another's backgrounds and ideas. The meeting therefore consisted of presentations of the organizations involved. Main question: does the Russian context asks for a specific adaptation of the artist-in-residence concept?

Remarkable was the presence of private owned residency programmes. Private ownership seems to give much more freedom with regard to filling in the artist-in-residence concept, than state initiative. Yet the conclusion was that in all cases a strong conviction is needed. Everybody agreed that setting up an artist-in-residence programme is a demanding task, not just something "extra".

The meeting was attended by 25 employees and volunteers in the organization of the future Nikola Lenivetz Park: a mix of architects, cultural managers, logistic experts, artists.

Among those present were artist-initiator of Archstoyanie festival Nikolay Polissky and Maxim Nogotkov, the private owner of the Park, the Festival, and of "Archpolis", the name given to the residency art venue-in-progress at the Nikola-Lenivetz park.

Theme of the meeting was twofold:

Ideas were discussed how to give space to architects, designers, artists and performers, on the location of Nikola-Lenivetz park, not only during the festival Archstoyanie but also during the whole Summer and maybe even during the whole year.
Right, with microphone: artist Nikolai Polissky

The meeting gave a intriguing insight in the issues at stake:

The discussion was open and strong, each participant could speak freely.

The participants to the meeting were very curious for the comments of the NL team. We stressed the fact that we, as NL team at a distance,  were not able to judge. Our advice was to formulate a policy, instead of only collect differences in opinions. To develop a clear policy-line, which can be evaluated and adjusted in due time. 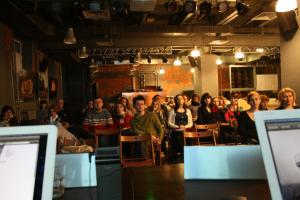 The meeting was attended by approximately 30 participants, most of them younger artists, curators, and students in cultural management. The aim of the meeting was to give insight in practicalities and experiences in using artist-in-residence programs, focused on practicalities of how to search for AiR programs, how to orientate oneself and how to choose.

Heid Vogels focused on the support given by the TransArtists website in applying for AiR programs, such as the checklists. Gaston ten Horn spoke about the ways in which residency programs stimulate artistic careers. 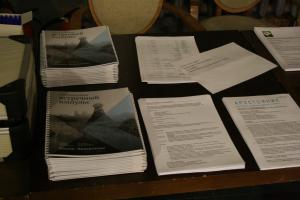 Inna Prilezhaeva showed the history of the development of Nikola-Lenivetz Park. Artist Silvia Franceschini gave a personal story of her participation in Mazama Residency - on the field conditions of "a transdisciplinary experiment".

The meeting was attended by an audience of more than 60 people, mostly younger artists, cultural managers, and sociologists. The meeting was organized in the framework of CityCult Project, a series of public lectures at Loft Etazhi, on the theme of city culture, set up by the Center for Independent Sociological Research (CISR) in collaboration with Loft Etazhi (Svetlana Polynkova).

Next to the Mutual Impulse RU and NL team members the two organizers of the CISR participated:
- Oleg Pachenkov, Director of CISR, co-curator of CityCult Project.
- Lilia Voronkova, coordinator of trans-disciplinary projects  of CISR. 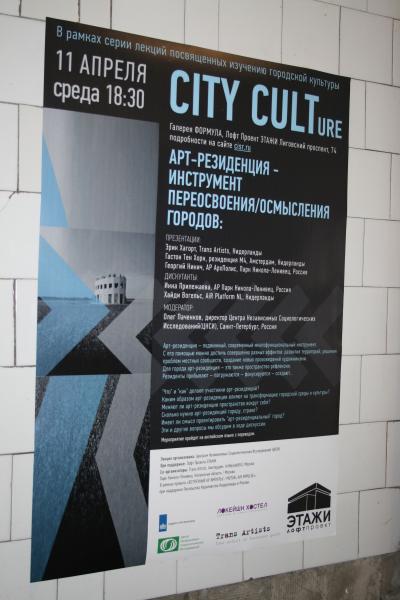 How can artist-in-residence programs contribute to the development of alternative creative culture in the city?

Especially interesting was the difference in local history concerning the rise of alternative creative scenes.

Both St. Petersburg and many Dutch cities have seen a rise in squatted venues as "free artistic spaces". In the Netherlands many of these squatted spaces have become established art centers, with a consistent cultural policy and space for artist-in-residence programs. In St. Petersburg only a few squatted venues have managed to become art centers, of which Pushinskaya-10 is most known, but it seems difficult to connect to new contemporary art developments once a center as such, has been established. 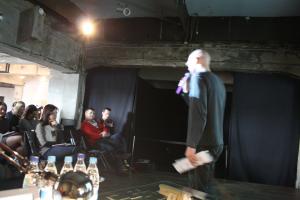 For the audience the contribution by Gaston ten Horn about the residency program M4 in the biggest former squat of Amsterdam, Tetterode, was especially fruitful. Many questions were asked about the tactics and strategies of the management team of  Tetterode in dealing with governmental regulations, policies and government.

The meeting was attended by appr. 20 art professionals and initiators of (potential) residency projects.
PRO ARTE host of the day was Yana Klichuk, coordinator visual arts.

The aim was to collect experiences of (potential) art-residence programs in St. Petersburg and the Karelian region, and to discuss their ideas on AiR models, concepts and development strategies.

Currently there are only two functioning AiR initiatives in St. Petersburg: apart from the NCCA Kronstadt residency program (which unfortunately couldn't be present during the meeting) there is the starting guest studios of Pushkinskaya-10 center, represented by coordinator Anastasia Patsey. So-called "short-term-residences" in St. Petersburg are developed by curator Anna Bitkina, coordinator of TOK, a collective of art curators.

From the wider region of Karelia, eight initiators of potential artist-in-residence programs were present. The diversity between initiatives, and so the interests were miles apart. Some did have already plans for setting up an AiR program for years, some were just figuring out what the concept of artist-in-residence could mean.

Especially interesting was the presentation by Anatolii Titov, chairman of the Karelian branch of the Russian Union of Artists, who represented, together with Inga Gurilova,  the "Friendship" company, which organizes a yearly plein-air painting collaboration in a village in Karelia. They told to reconsider the traditional format, in order to open up to contemporary art and to invite artists from abroad.

Ideas about realizing AiR programs were in a very first stage of development.
Curiosity was high, and the exchange of knowledge and questions was for all participants very fruitful.

How to get to an artist-in-residence program?
Workshop-presentation for artists
April 12, St. Petersburg, PRO ARTE Foundation

The workshop-presentation was attended by more than 50 young artists and designers from St. Petersburg.
Aim of the workshop was to give the participants basic insight in how to get access to knowledge about artist-in-residence. How to search, find, match, and apply for international art residencies? 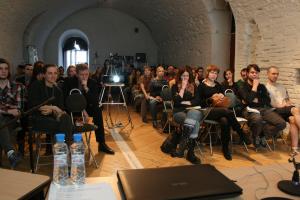 The Mutual Impulse team presented experiences and stories about facts, use and value. Many questions by the participants were asked about practicalities. For the audience the presentation by Gaston ten Horn about his experience in evaluating applications proved to be fruitful: it was the first time that they got an insight in how providers of artist-in-residence programs evaluate applications and in how they can make their choices.

After the meeting many participants stayed to ask questions and to receive advice.